We thought it be worthwhile just touching on the performance of the Australian equity market over the last five to six week period. Since touching it’s low point on 23 March, the equity market has been up over 20% through to the end of April. We thought it would be worth while to think about the context of that recent performance, technically we’removing back into a bull phase, and whether we think that that’s sustainable and the market is likely to move higher in the short to medium term. 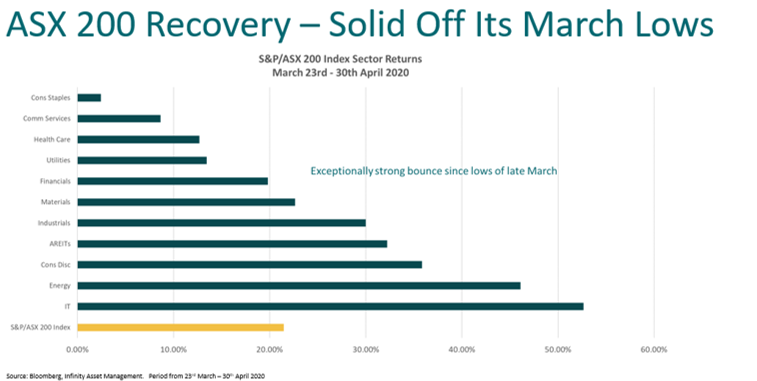 The first chart here shows the performance of each of the sectors, as well as the broader market share from 23 March all the way through to the April 30. As you can see over that five week period, the market was up over 20% in parts of the market and parts of the market were well above 30% – the IT sector was up over 50%. over that ensuing period. So a very solid bounce in the performance of the equity market over that five to six week period.

Markets continue on in that sawtooth movement we’ve spoken about previously after a very difficult month. Where the market was down roughly around about 21% in March, we saw that recovery of about 8.5% in April. But when you’re thinking about it from that low point back in the end of March, the market was well up north of 20% which is a very solid investment return in that context.

So where do we see the market at the moment? Do we think the market continue to move higher from here, particularly given the backdrop where the economy is still by and large in lock down? Certain parts of the market have started to ease restrictions but the earnings outlook, certainly for corporate Australia, remains very opaque. We’re seeing many corporates continue to revise guidance down and even offer no guidance in regards to their forward outlook.

So when you’re thinking about that in the context of market positioning and the performance of markets, it really is important. 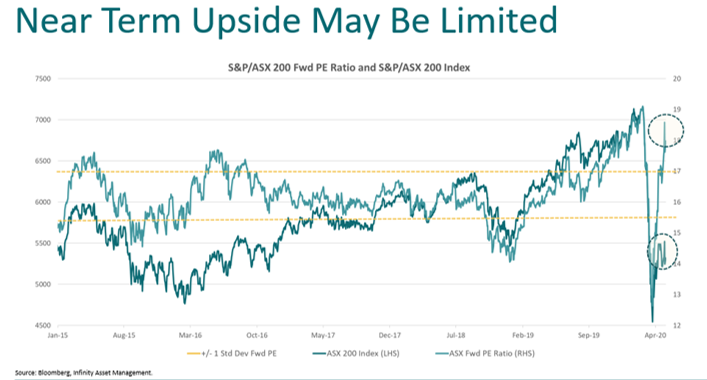 This second slide here just shows one of the ways that we think about ascertaining value in a market sense. One of the areas that we look at is what are we paying for a dollar worth of earnings or the price to earnings ratio. We look at that on a forward looking basis. You can see here that the two lines reflect the performance of the Australian share market and that price to earnings ratio over that period. You can see when the market fell off significantly from February all the way down to the low point in March, the forward PE on the market dropped considerably all the way down to its longer term averages and even below that. We saw what we believed to be some significant value come into the market notwithstanding the challenges that were clearly evident in both economic and financial market terms.

That was one of the reasons to remain invested and to continue to look at the opportunities that may present themselves when markets do sell off in such a significant and speedy manner. As we’ve seen over the last five to six week period, the market’s rallied up over 20% and equally we haven’t yet seen the up tick in the earnings outlook. In fact, we continue to say that the earnings outlook remains relatively constrained. But the price to earnings ratio on the back of that has moved higher. It’s gone well above what it was before the market had its decline back in February.

So when we think about the market at this point in time in regards to Australian equities, and equally for global equities, we think about where we are in a valuation sense relative to the earnings outlook we would probably say that the market is certainly looking relatively fully valued at these levels. It’s not to say that the market can’t move higher, but the speed of the upward movement that we’ve seen over the last six weeks, in our view, is probably unlikely to be repeated over the next couple of months. Domestically, as we work our way out of the lock down and the economy starts to re-open, the earnings outlook will become more proactive given the sense for individual corporates and industries as a whole. But we don’t believe at this point in time that there’s enough clarity to be able to say that the market’s going to rally another 20% from here.

So our view at the moment is that we’re probably in an arranged trading mode within the local equity market. There continues to be that support coming both fiscally as well as from central banks, domestically and globally that we think will continue to underpin the market in the near term. But we don’t expect a significant upward movement from here.

So what does it mean for a strategy point of view? So from our perspective, we’re continuing to focus on the opportunities that may present themselves as we move forward. But we do think that we’ve probably seen the worst of the lows as we speak today. If the economy can continue to reopen over the next three to six months and beyond we think that will clearly be positive, not only for the earnings outlook for corporate Australia, but ultimately for the share prices that reflect that. We’re continuing to selectively add to our equity positions as well as rotate our asset allocation to try and take advantage of that.

As always, if you have any concerns about your portfolio, please feel free to reach out to your advisor.

This post and some supporting materials may be regarded as general advice. That is, your personal objectives, needs or financial situations were not taken into account when preparing this information. Accordingly, you should consider the appropriateness of any general advice we may have given you, having regard to your own objectives, financial situation and needs before acting on it.  Where the information relates to a particular financial product, you should obtain and consider the relevant product disclosure statement before making any decision to purchase that financial product.

The material in this post is correct and complete as of the data it was posted.  Viridian is not responsible for, and expressly disclaims all liability for, damages of any kind arising out of use, reference to, or reliance on any information contained within this site.

Volunteering with The Big Umbrella in 2021
Loss Aversion Bias
October Market Update with CIO Piers Bolger
Login to Viridian Advisory
Reset Password
Enter the username or e-mail you used in your profile. A password reset link will be sent to you by email.