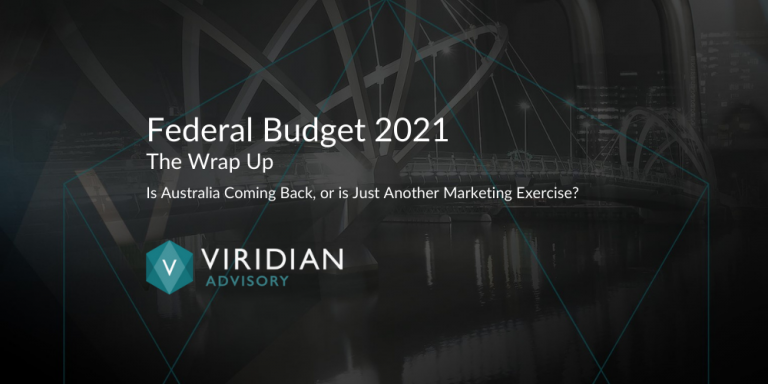 Josh Frydenberg announced that “Australia is coming back”, while Jim Chalmers called it “Another marketing exercise”.  The 2021 Federal Budget is here, and it’s in May instead of October, which is probably a positive sign all in itself.

This is a budget squarely aimed at supporting growth in the economy. Productivity gains are intended to address COVID related government debt over the long-term by encouraging business investment and innovation.

There are important stimulus measures such as the extension of Temporary Full Expensing and Tax Loss Carry Back through to 30 June 2023. There is also the extension of the Low and Middle Income Tax Offset until 30 June 2022. Each of these will encourage economic activity and growth.

There are some good measures around innovation enabling taxpayers to self assess the effective life of intangible assets plus a concessional corporate tax rate for patent related income in the medical and biotechnology industries.

Also some good measures around superannuation, including eliminating the work test for salary sacrifice and non concessional contributions for those aged 67 to 74. The age for accessing the downsizing superannuation contribution will also reduce from 65 to 60.

Some other interesting changes include a new tax residency test to improve clarity and some changes to employee share scheme rules.

While the size of the deficit may cause some widening in credit spreads we believe it is both proportionate and appropriate given the ongoing challenges facing the domestic economy and is a reflection of what we are seeing in other countries globally. Australia remains well positioned to many other countries in regard to its net debt position and we see no negative impact to our AAA credit rating from this budget.

There remain many sectors that continue to operate at below capacity and when combined with no increase in net migration, constrained wage growth and the ongoing challenges associated with the pandemic, the approach taken by the Government to provide ongoing fiscal supports is critical in ensuring that the domestic economy can continue to recover and that the growth profile can be as widely felt across all segments of the community.

The desire to further increase spending on infrastructure to improve productivity and supply chain logistics as well as the extension of the middle-income tax offsets, alongside the changes in the residency rule for SMSF alongside other tax offsets and support measure to reduce barriers to work (i.e. via additional child care subsidies and the extension of the Job Trainer Fund) provides a growth opportunity.  Overall, we view this budget and the proposed changes as fundamentally positive for the economy and ultimately financial markets over the medium term.

The Federal Budget addresses criticism of the government around its attitudes towards women and their empowerment. The amendments to Child Care Subsidy, increased opportunities to make spouse contributions, removing the $450 per month threshold for super eligibility & assisting sole parents into the housing market are all measures which are squarely aimed at ‘working mothers’. Further commitments to funding of women’s safety initiatives, women’s health & career pathways for women provide context to the electorate this government is reaching out to. There is no doubt that during the lockdowns and pandemic response it is the same slice of the electorate that bore the brunt of increased unpaid caring duties and in many cases had to opt out of the work force to provide primary care. By reducing the barriers to return to work, there is hope that the second income earner in the family puts the additional bacon on the family table, increasing consumption & demand in time for the next federal election. The budget would like Mum to go back to work.

It was heartening that in the budget the government are putting together policy to reach out to and support some of our most vulnerable Australians with:

Funds to help train more staff in aged care and to raise awareness of the type of employment opportunities available in aged care in Australia. This is really important as traditionally it has been our migrant workforce that has worked in this area and with the borders shut many Aged Care residential homes are finding it hard to find employees.

Josh Frydenberg has said it is the Government’s plan to give retirees “more control over their money”.  To achieve this, he has announced the widening of eligibility of the downsizer contribution, to individuals aged 60 years or older (previously 65) to contribute up to $300,000, to their super fund from the proceeds of selling their main residence. In addition, the work test rule for those aged 67-75 will be abolished.  This means that without satisfying any work test those aged under 75 will be able to make salary sacrifice and non- concessional contributions.  The changes are expected to be from 1 July 2022 onwards.

This budget has seen a push to promote innovation through a “Digital Economy Strategy” in which the government will provide $1.2 billion over six years across a number of initiatives with the aim to “grow Australia’s future as a modern and leading digital economy by 2030”. Further spending was flagged to create a National AI Centre that will support SMEs adopt and use transformative artificial intelligence technologies, while funding for a push towards e-invoicing by businesses across all levels of government which will be sure to get a few finance departments celebrating but cabinet salesmen lamenting the digital surge.

The push for innovation also comes in the form of a ‘patent box’ which will see corporate income derived from Australian patents taxed at an effective tax rate of 17%, this is a clear aim to entice R&D with skilled workers to base the laboratories in Australia through providing access to a more attractive tax rate.

An effort to attract talent to young Australian companies is also being made through changes to the taxing point of employee share schemes (ESS), by removing the automatic taxation of ESS when an employee leaves a company. There has also been a pledge to reduce red tape for businesses, primarily around unlisted companies who do not charge for or lend shares, as they are able to now offer up to $30,000 in shares per employee, up from $5,000. Again, this should have finance departments across Australia relieved that the government has recognised the current regulatory framework around ESSs as “too complex and fragmented”.

Reviews with clients to take on a new dimension – Jason King, Executive Advisor

The Federal Budget is focused on spending big to help Australians rebound from a pandemic that suppressed many of us. With a combination of personal income tax cuts, enhanced superannuation contribution options , significant cashflow opportunities for age pensioners and a huge rework the of aged care sector my immediate thought is our clients absolutely will benefit from our advice.

The ability to create a tax free retirement has become much more achievable after tonight’s announcements. The rules have been eased and reviews with our clients will take on a completely new dimension. Coupled with historically low interest rates the opportunity to live the life you choose awaits you.

Just Give Me the Dot Points…

The Economy and the Deficit

What to do if you have a financial windfall

There is no one size fits all answer to investment

Login to Viridian Advisory
Reset Password
Enter the username or e-mail you used in your profile. A password reset link will be sent to you by email.