The domestic market was up around 2% over February. Contrasted by global equities that were down between 3%-6% led by sharp falls in both European and US markets.

Bond markets were also down with domestic and global down about 1.0%-1.5%, there was no real respite for investors in either growth or defensive markets during February with only the commodity markets continuing to rally.

The war in Eastern Europe shows no signs of abating. Combining with economic sanctions placed on Russia, commodity prices are remaining elevated. It is our expectation they will continue to increase throughout the course of this year. Particularly those commodities that are experiencing supply chain constraints with Russia and Ukraine being contributors around oil, wheat and other major commodities. 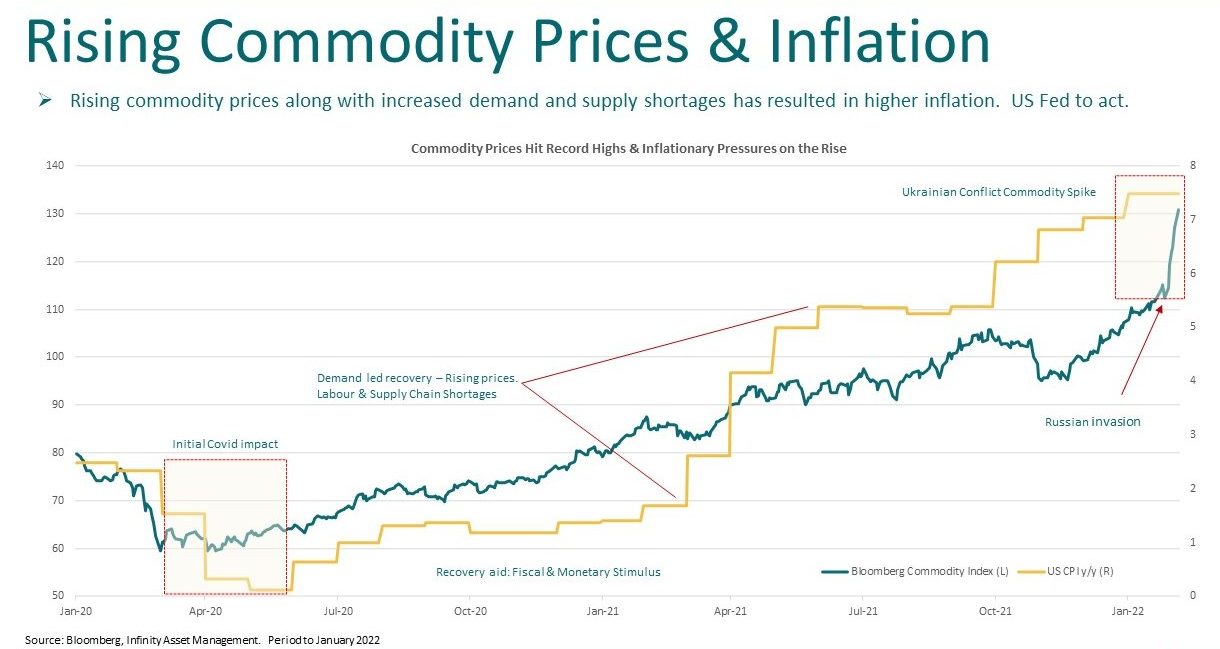 A deeper dive into the impact that higher commodity prices are having on inflation can be seen here.

With inflation on a global scale running above central bank targets, this has left central banks poised to raise rates. The Federal Reserve Chair, Jerome Powell indicated that the US Fed would look to move rates higher in March. While we anticipated a 50-basis point move, we have moderated that to now be a 25-basis point rise, but we expect those rises to continue across the world throughout the year.

RBA won’t be as aggressive

Domestically, inflation is still in the upper to mid-range of the RBA’s target, so we do not anticipate the RBA to move as aggressively as other central banks may look to the second half of the year before considering moving rates higher. We have not seen wage growth at the same levels relative to other countries, and it remains one of the RBA’s key pillars in their decision-making process. With wage growth in Australia sitting at 2%-4%, which is half of what we are seeing in the U.S. Additionally, real wages in Australia are negative despite declining unemployment. While there is potential for a rate rise domestically, we believe the RBA will be more cautious. 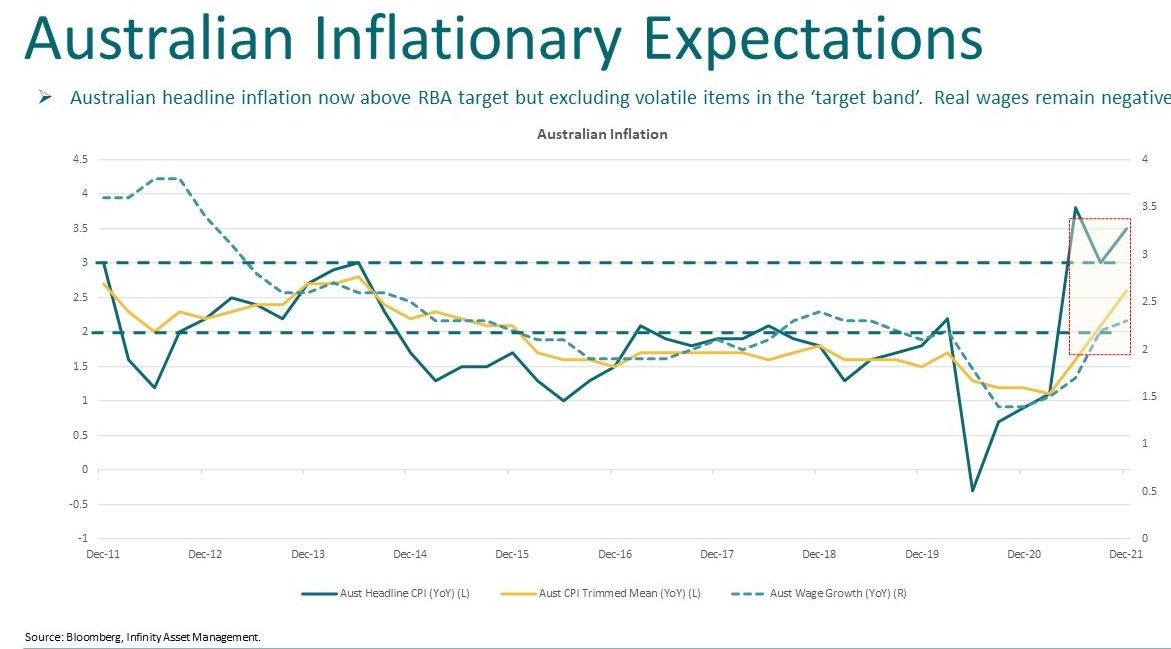 A deeper dive into domestic inflation and wage growth can be found here.

Central banks aggression is being consistent in the way that they are managing monetary policy going forward. This is another headwind for financial markets, particularly bond markets highlighted by the fact that despite challenges we have seen and the conflict in Europe, we have not seen a big shift downwards in bond yields. Central banks need to deal into that; therefore, bond markets are reactive, and we have seen either move sideways, or in most cases higher.

The domestic 1H22 reporting season remained solid despite occurring in a challenging market environment. Hit and misses on company EPS growth targets, these were split quite evenly across the across the ASX at around 38% each, with those companies reporting in-line with market estimates, laying around 24%. We view the growth in the earnings outlook as a potential to underpin higher moves in the domestic market, despite the obvious geopolitical risks. Another catalyst for Aust equities is that dividends are exponentially moving higher after a period where corporates replenished their balance sheets. We expect dividends to continue to move higher over the next 12 months, which should provide another positive backdrop for the domestic equity market.

Overall, February was an incredible month and it has continued into March. The immediate issue is clearly what we are seeing in Eastern Europe with the current conflict. There will be knock-on impact of sanctions from Western powers. We are positive they are going to be with us for several years and will not dissipate quickly, no matter how or when the conflict ends. This will have further implications for financial markets, more importantly it will have significant implications for commodity markets in the short to medium and that is something that we are focusing on, along with the overall knock-on impact to both equity and bond markets.

This post and some supporting materials may be regarded as general advice. That is, your personal objectives, needs or financial situations were not taken into account when preparing this information. Accordingly, you should consider the appropriateness of any general advice we may have given you, having regard to your own objectives, financial situation and needs before acting on it. Where the information relates to a particular financial product, you should obtain and consider the relevant product disclosure statement before making any decision to purchase that financial product. The material in this post is correct and complete as of the date it was posted. Viridian is not responsible for, and expressly disclaims all liability for, damages of any kind arising out of use, reference to, or reliance on any information contained within this site.

Volunteering with The Big Umbrella in 2021
National Volunteer Week at Viridian
April Market Update with CIO Piers Bolger
Login to Viridian Advisory
Reset Password
Enter the username or e-mail you used in your profile. A password reset link will be sent to you by email.
Accounts/Payroll Officer

Our Accounts & Payroll Officers are customer focused to ensure a positive impact to our employee and supplier base. They have the ability to recognise and proactively research and resolve any queries and have a keen interest in research and analysis. They possess the ability to work in a dynamic environment which moves between autonomy and team work. They hold diversified interests in technology and systems which continually improve our environment, and are dedicated to developing themselves further whether through education or on the job learning.

The responsibilities of the Accounts & Payroll Officer role at Viridian Advisory include but are not limited to:

The successful applicant will have:

We are looking for someone with the following:

What You Get From Us

Working at Viridian means that you’ll have access to a range of benefits centered around community and inclusivity, including:

Reporting to the Corporate Finance Manager, the Financial Analyst / Accountant is key contributor to the wider Finance Division. While our monthly finance and reporting requirements are our priority – the majority of our time is spent on program development, technical analysis & recommendations and market or operational trend & data review. We operate under the ethos that research and analysis lead to the consistent improvement of our company operations and reporting.

What You Get From Us

Working at Viridian means that you’ll have access to a range of benefits centered around community and inclusivity, including: